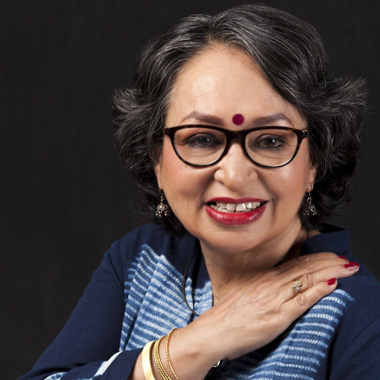 Stories help us to make sense of the world around us, to understand and respect cultures different from ours and to connect with our past. Children should be exposed to a variety of stories, and as authors, we should attempt to give them the best we can. Deepa Agarwal

Author, poet and translator, Deepa Agarwal writes for both children and adults and has over 50 books published.

A frequent contributor to magazines and journals in India and abroad, she has edited and compiled several anthologies as well.

Her work has been translated into several Indian and foreign languages and five of her books have been included in the White Raven catalogue of the International Youth Library Munich. Recent titles include, The Teenage Diary of Nur Jahan (Speaking Tiger), Blessed (Hachette India) Friendship Stories (Scholastic India) and Journey to the Forbidden City (Penguin/Puffin).

Deepa has also received fellowships from the Ministry of Culture and the Austrian government to research children’s literature. She has presented papers at many seminars and conferences both in India and abroad. She is active in reading promotion and is a resource person for Scholastic India, National Book Trust, India and other organizations, conducting creative writing workshops and storytelling sessions in schools.

What is it about poetry that a verse you read in your childhood stays with you for the rest of your life? Open the pages ...

An adventure to the roof of the world through the eyes of a teenager.

Listen, O King!: Five-and-Twenty Tales of Vikram and the Vetal

In a land of glorious kings, bloodthirsty demons and talking spirits, was born the lore of Vikram and the Vetal. What follows is exciting.

When learned Brahmin Vishnugupta is humiliated by arrogant king Dhana Nanda in a public gathering, he swears revenge. Anger is his weakness, but strategy, his strength.

Long before she became Nur Jahan—Emperor Jahangir’s last wife and the most influential Mughal queen—sh ...

Words to Live By

A rich, colourful and lively gathering of India's finest and most original thinkers and writers, leaders and opinion-mak ...

Sacked! Folk Tales You Can Carry Around

Best friends have been through it all—from Bonding over strange pets and mysterious illnesses to learning to forgi ...