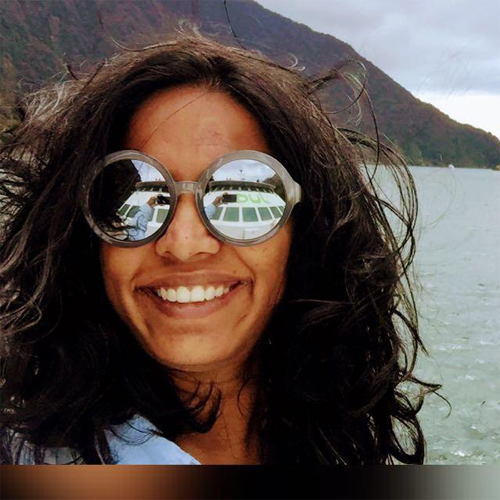 Stories are everywhere, in everyone and in everything. Discover them, share them, cherish them. Arthi Anand Navneet

Arthi Anand Navaneeth is a marketing professional with an MNC. A mother of two daughters, she loves travel, music, food, handicrafts and jigsaw puzzles and the stories they carry.

Have You Seen This? and Ranganna are her picture books published by Tulika.  She began her writing career with Mister Muthu, a much loved monthly series for Chandamama which she penned for over two years. More recently, Fundooda- Chie Media, has published seven stories by Arthi. She has also lent her voice to the audio versions of various picture books for them.

A children's book reviewer at Saffron Tree , her storytelling initiative began post the launch of her first book . Arts Tales with Arthi Anand is active on weekends and you will find her on FB at  https://www.facebook.com/artstales

Her story sessions use minimal props and are spiced with song, dance & a relevant craft. She draws from stories from around the world and weaves a theme into sessions.

She now lives in Chennai , post her Jakarta sojourn.  During her stint in Indonesia, she represented India as a storyteller at the International Story fest- Cerita Ajaib- Indonesia 2017.

Earlier, in Bangalore, she was a storyteller at multiple Bookalore events, including the one at Bangalore Lit Fest 2013. She also launched Tulika's Tales from the North East at the BLF 2014. She was the storyteller at The Pratham Champions flagship events as well.

Apart from bookstores, schools and libraries, she has conducted Story telling events across Hamleys, Kitschdii, Hundred Hands and Soul Sante. She was a regular volunteer story teller at the Kidwai Cancer Unit and at Anand Vidyalaya, in Bangalore.

She is a PG from MICA, Ahmedabad and an alumnus of R.A. Podar College, Mumbai. She considers herself Dakshini, since she has spent equal years across Mumbai, Bangalore, Chennai and few more across Ahmendabad, Vijayawada and Guntur.

It’s a very mixed-up world where flowers talk and trees fly! The goofy text spins on whacky illustrations that whi ...

An elephant with nail polish? Illustrations that are a riot of colour zestfully capture Ranganna the elephant who loves ...

An elephant with nail polish? Illustrations that are a riot of colour zestfully capture Ranganna the elephant who loves ...

It's a very mixed-up world where flowers talk and trees fly! The goofy text of this mad little bilingual spins on whacky ...