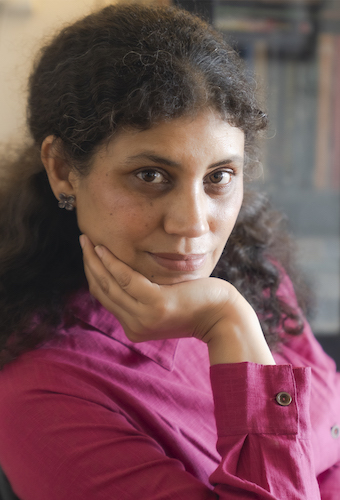 I believe passionately that books, thoughts, and ideas can change the world. And no one is more impressionable than a child. So writers have an overwhelming responsibility to tell stories of goodness, kindness, inclusivity, and courage, but with a light hand and loads of humour. Tripti Nainwal

Tripti Nainwal likes to write simply, making sure that children of all ages understand her. Her first books were a series explaining the wind, earth, and space to very small children.

Growing up on a steady diet of comic books, it was perhaps only natural that in her early 20’s, Tripti found herself at the doors of the Tinkle office one morning. Uncle Pai, who was probably used to youngsters trickling in without any reason, gave her a bemused look and a spirited speech on advaita philosophy. By the time she left…a few years had gone by!

Having scripted for Tinkle for many years, she now writes graphic biographies for Amar Chitra Katha. She loves the thought of bringing alive the story of a true-life superstar who will hopefully inspire children everywhere. She wants children to see the struggle, the fear, and the courage, and relate to it firsthand.

This was the exact thought that led to Goodearth Publication’s ‘The Story of Buddha – The Enlightened One’.  Though the events happened a long time ago, her narrative is strong and contemporary. She speaks directly to children, telling them about a child, who in many ways was just like them. And in doing so, she makes Siddhartha’s story relevant even today.

When not writing, editing, or being chastised by her cat, Tripti likes to spend time in the mountains with her family.