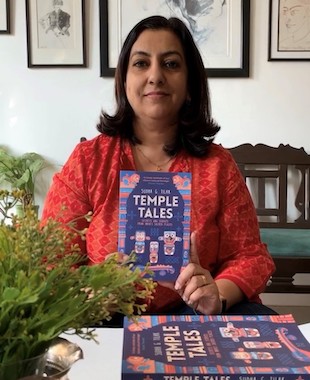 I was introduced to the magical world of stories by my father whose bedtime stories lulled me to much more than sleep; story-telling awakened worlds, both imagined and real, for me. Sudha G Tilak

Sudha G Tilak was born in a city of Tirunelveli in southern Tamil Nadu. She grew up and completed her schooling and college years in Chennai.

She has worked as a journalist from Chennai, Kolkata and Delhi. She has worked with many national publications like The Times of India, The Telegraph, India Today and her work has appeared in BBC Online, Al Jazeera, The Independent, The Strait Times, The Hindustan Times, Outlook, Open among others.

Sudha won the Chevening scholarship for Young Journalists and went to the UK and has worked on features from Oxford and London, Sydney, Germany, Sri Lanka among others.

Her short stories were published in The Little Magazine and Out of Print magazine. She won the best short story prize, Elle magazine in 2012.

Temple Tales (Hachette) is her first non-fiction book for children.

Which holy place in India has the mysteries of the universe hidden away in an icy cave?Where would you find a shrine for ...