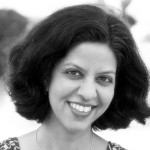 Shruthi Rao grew up in the Bangalore of the eighties and nineties. She got a bachelor's degree in electrical engineering from RVCE, Bangalore.

After that, she got a master's degree in energy engineering from NIT, Trichy, where she tried to design an efficient wind pump. (Long story short, it crashed.) She worked in the IT industry in Mumbai and Bangalore for a while, until her daughter dragged out the writer inside her. Shruthi now lives in California with her family. She misses India, but comforts herself with the beauty of the Californian redwoods and the Pacific Coast. She loves books, trees, benches, desserts, science, trivia and long walks.

10 Indian Women Who Were the First to Do What They Did, Duckbill, 2019

Children First Contest, 2017, Shortlist, for Susie Will Not Speak

DNA-Out of Print Short Fiction Award, 2014, Winner, for "The Awakening"

Manya badly, badly wants to be Shere Khan in her school play. The Jungle Book is her favourite film and she knows all th ...

Susie will Not Speak

Jahan’s best friend Susie has a lisp. The boys in the park tease her and call her Thoothie and the kids at school ...

This book tells the stories of ten Indian women who were pioneers in diverse fields. While their stories and challenges ...

How We Know What We Know

Why did pirates covet maps more than gold?Does Mars sometimes slip into reverse gear?Can trees reveal secrets of the pas ...

20 Indians Who Changed the World

A brilliant collection of profiles of 20 trailblazing Indians who changed the world with their ideas, innovation and Dis ...

India to the Rescue

Find out how a lean mean band of Indian soldiers saved a country from a surprise attack by its enemies. India to the Res ...

Spaceship to the Universe: The Story of Libraries

'A great library is freedom. And that freedom must not be compromised. It must be available to all who need it, and that ...