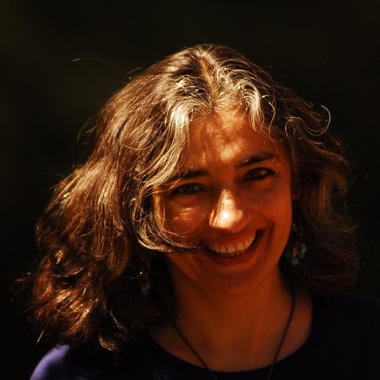 I think children need stories that open up the wonder of the world for them, stories of fantasy and reality, stories that show them who they are and who they can become, stories that build bridges across the many differences that exist in our lives. Samina Mishra

Samina Mishra is a documentary filmmaker, writer and teacher based in New Delhi, with a special interest in media for and about children.

Her work uses the lens of childhood, identity and education to reflect the experience of growing up in India. Her films include The Teacher and The World (2016), Jagriti Yatra (2013), Two Lives (2007), The House on Gulmohar Avenue (2005) and Stories of Girlhood (2001).

She has also created a multi-media exhibition, Home and Away (2004) on second and third generation British Asian children and written children's books published by Scholastic, Tulika, Young Zubaan, The Wisdom Tree and Penguin. She worked on Nehru’s Children, an archival research project on the archive of the Children’s Film Society of India for the India Foundation for the Arts. Her book, My Sweet Home: Childhood Stories from a Corner of the City(Mapin 2017) comes out of a creative writing and art workshop designed to reflect the world through children’s self-expression and creative practice.

Her interest in the ways that the arts can be included in education led her to head programming for two years at the Nehru Learning Centre for Children and Youth, part of the Nehru Memorial Museum and Library where she focussed on using the arts in a variety of ways with government school children.

She was a Jury Member of the Crossword Children’s Book Award 2013 and 2014, the Hindu Young World-Goodbooks Award 2019 for the Non-Fiction category and the SIFFCY – Smile International Film Festival for Children and Youth 2015. She was also a member of the Core Team that conceptualised and designed the Summer Fellowship Programme for Elementary School Teachers (2014 and 2015) at the Regional Resource Centre for Elementary Education, Delhi University. She is currently teaching the International Baccalaureate Film programme at Pathways School Noida and collaborating on Torchlight, a web journal on libraries and bookish love.

She is also the Curator of Half Ticket, the children’s section at the MAMI Mumbai Film Festival.

Shabana and the Baby Goat

Wherever Shabana goes, there goes Kajri the little goat. The two are best friends! But there is a small gnawing problem ...

It is day 7 of the lockdown and everyone says the skies are blue again.Jamlo walks. She looks straight at the road ahead ...

Whenever Nida wants to do something new, Abba is scared for her and says NONONO. But Nida needs to learn and do new thin ...

My Friends in the City/Sheher Mein Mere Dost

Who says the city belongs only to people? Meet Moti the elephant, Phad Phad the pigeon, Banno the buffalo and many other ...