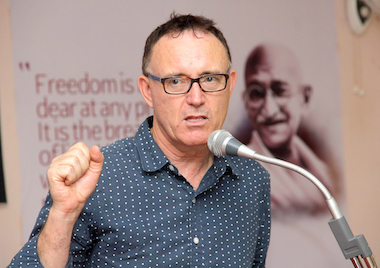 “The No Limits attitude underpinning the reveries of Daydreamer Dev is my central message to all young readers. Imagination can supercharge every one of us.” Ken Spillman

Ken Spillman developed his imagination while playing games in bushland, on the edge of one of Australia’s most isolated cities, and by reading adventures set in faraway places.

Ken is now the author of around eighty books, published on four continents in more than twenty languages. Ken is a frequent visitor to India and has written a number of books featuring sharp-witted young Indian characters. These include The Absolutely True Adventures of Daydreamer Dev (2019); No Fear, Jiyaa! (2017); Radhika Takes the Plunge (2012), and Advaita the Writer (2011). Other books popular among Indian school children include his Jake series as well as his various volumes of All-Time Favourite Fairy Tales and Aesop’s Fables. Picture books released in India include The Magic Bird (2017), Clumsy (2016); The Great Storyteller (2014), Rahul and the Dream Bat (2014), The Auto that Flew (2014), andThe Strange Story of Felicity Frown (Scholastic, 2012). Ken has appeared at 3 Bookaroo LitFests to date. He enjoys reading, music, theatre, all sports except those invented in the USA, and nature. A little-known fact is that Ken has been a successful swimming coach, helping many juniors to Australian national championship level with some progressing to Olympics, World Aquatics Championships or Commonwealth Games.

Translation of English Title Clumsy!. She spills, drops, breaks and trips on things. She is called Clumsy, Slowcoach, Ca ...

Mild-mannered schoolboy Dev is no stranger to survival in extreme environments. Join him on his incredible adventures to ...