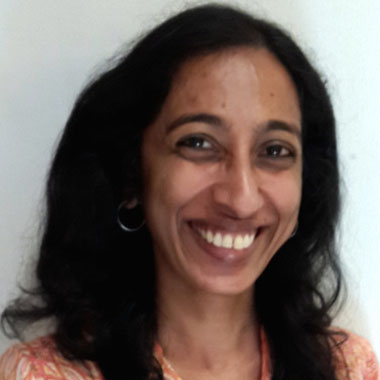 Books made me the person that I am today. I owe everything to them. Reading is still my favourite thing to do every single day. When I am with books (at home, or at the library or a bookshop), a delicious feeling of happiness and serenity envelops me. Devika Rangachari

Dr. Devika Rangachari is an award-winning writer whose book, Queen of Ice (Duckbill), has been optioned for a movie/ TV series.

A chocoholic, potato-fan and book-devourer, Devika is never far from one of these three loves.

Devika's work has been much appreciated all over the world. The Oxford Encyclopedia of Children’s Literature, vol. 3, edited by Jack Zipes (Oxford University Press, 2006) includes an entry on Devika's works. She was invited to participate in the International Children’s Book Week organized by the International Library at Stockholm, Sweden, in 2007 as a guest author.

She has been on the jury of the Crossword Book Awards for various categories and the Hindu-Young World Book Awards. Devika is currently the recipient of a senior fellowship awarded by the Ministry of Culture, Government of India, for outstanding persons in the field of culture. She is researching gender-sensitive historical fiction for children and young adults in India.

10 Indian Monarchs whose Amazing Stories you may not Know

This book tells the stories of ten Indian monarchs who find, at best, passing mention in the history textbooks we read, ...

Everyone agreed that Raman of Tenali was very celver. As a boy, he exasperated people with his mischief as much as he im ...

The Merry Mischief of Gopal Bhand

No one quite knew how Gopal - the son of a barber from a small village - became Maharaja Krishna Chandra's jester. Was i ...

The Wit Of Tenali Raman

Everyone agreed that Raman of Tenali was very clever. As a boy- he exasperated people with his mischief as much as he im ...

Didda, princess of Lohara, is beautiful, intelligent – and lame.Despised by her father and bullied by his heir, Di ...

Religion is not in books, not in forms, not in sects, not in nation; religion is in the human heart…It is love al ...

The daughter of the powerful somavashi king of ko SA LA, prithvimahadevi' s life is circumscribed by the rules that gove ...

'I will not yield. . .'Lakshmibai, the widowed queen of Jhansi, is determined to protect her son's right to his father's ...